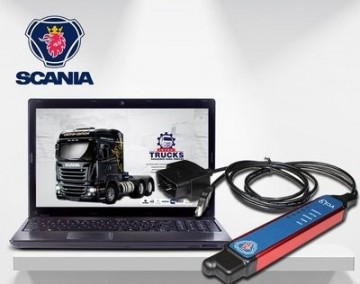 Scania VCI3 is the latest diagnostic tool that is used together with Scania Diagnos & Programmer 3 (SDP3) software to diagnose and troubleshoot Scania vehicles.SDP3 - It is the software for diagnostics and programming that operating with the interface VCI3, the version of SDP3 is v2.4X work only with Windows 7 and 8.

Vehicle Communication Interface (VCI) is the interface which is used between the vehicle or an industrial and marine engine and a computer with SDP3.

Scania Diagnos & Programmer 3 (SDP3) communicates with Scania vehicles and Scania industrial and marine engines. The program has been developed to support the electrical system with CAN communication. The program is used for troubleshooting, adjusting customer parameters, calibrations, conversions affecting the electrical system and updating software in control units.

Industrial and marine engines with S6 or S8 control unit on E2011 type engines, have the diagnostic socket located on the engine. When connecting SDP3, an adapter 1862924 must be used in order to connect VCI.

• Decrypt SOPS export file to XML format.
• Edit XML file with any XML editor or with the one provided.
• Modify more than 300 parameters, like AdBlue, EGR, NOx Control and much more(ask for complete list).
• Encrypt XML file to SOPS import.
• Upload SOPS import file to truck with SDP3 diagnostic kit.